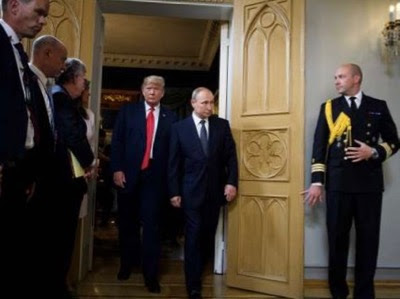 Read more »
Posted by luisavasconcellos2012@gmail.com at 10:53 AM No comments: 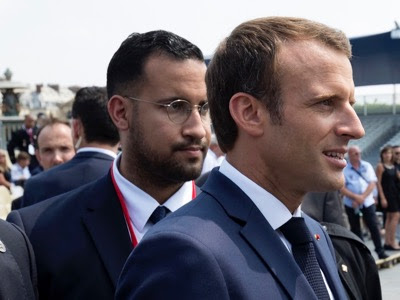 Read more »
Posted by luisavasconcellos2012@gmail.com at 11:43 AM No comments: Read more »
Posted by luisavasconcellos2012@gmail.com at 11:24 AM No comments: 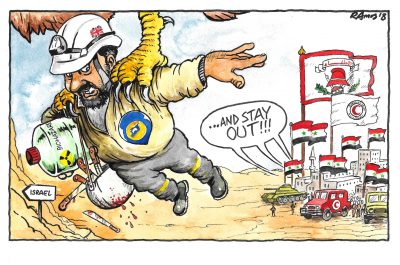 The Art of War

The warmonger's response to negotiation

«You have attacked our democracy. Your well-worn gamblers' denials do not interest us. If you continue with this attitude, we will consider it an act of war.» This is what Trump should have said to Putin at the Helsinki Summit, in the opinion of famous New York Times editorialist Thomas Friedman, published in La Repubblica. He went on to accuse the Russian President of having «attacked NATO, a fundamental pillar of international security, destabilised Europe, and bombed thousands of Syrian refugees, causing them to seek refuge in Europe.»

He then accused the President of the United States of having « repudiated his oath on the Constitution » and of being an « asset of Russian Intelligence » or at least playing at being one.

What Friedman expressed in these provocative terms corresponds to the position of a powerful internal and international front (of which the New York Times is an important mouthpiece) opposed to USA-Russia negotiations, which should continue with the invitation of Putin to the White House. But there is a substantial difference.

Cancelling out the climate of détente at the Helsinki Summit, the planetary warmongering system of the United States is in the process of intensifying the preparations for a war reaching from the  Atlantic to the Pacific:

Ø  After the landing of an US armoured brigade in Anvers, totalling a hundred tanks and a thousand military vehicles, a US aerial brigade landed in Rotterdam with sixty attack helicopters. These forces and others, all of them USA/NATO, are deployed along the borders of Russian territory, in the framework of operation Atlantic Resolve, launched in 2014 against « Russian aggression. » In its anti-Russian function, Poland asked for the permanent presence of an armoured US unit on its own territory, offering to pay between 1.5 - 2 billion dollars per year.

Ø  At the same time, NATO is intensifying the training and armament of troops in Georgia and Ukraine, candidates for entry into membership of the Alliance on the frontiers with Russia.

Ø  Meanwhile, the US Congress received with all honours Adriy Parubiy, founder of the National-Social Party (on the model of Adolf Hitler's National-Socialist Party), head of the neo-Nazi paramilitary formations employed by NATO in the Maïdan Square putsch.

Ø  NATO command in Lago Patria (JFC Naples) – under the orders of US Admiral James Foggo, who also commands the US naval forces in Europe and those in Africa – is working busily to organise the grand-scale exercise Trident Juncture 18, in which will participate 40,000 military personnel, 130 aircraft and 70 ships from more than 30 countries including Sweden and Finland, which are NATO partners. The exercise, which will take place in October in Norway and the adjacent seas, will simulate a scenario of « collective defence » - naturally enough, against « Russian aggression. »

Ø  In the Pacific, the major naval exercise RIMPAC 2018 (27 June to 2 August) is in full swing -   organised and directed by USINDOPACOM, the US Command which covers the Indian and Pacific oceans – with the participation of 25,000 sailors and marines, more than 50 ships and 200 war-planes.
The exercise – in which France, Germany and the United Kingdom are also participating – is clearly directed against China, which Admiral Phil Davidson, commander of USINDOPACOM, defines as a «major rival power which is eroding the international order in order to reduce the access of the USA to the region and thus become hegemonic.»

When Trump meets Chinese President Xi Jinping, Friedman will no doubt accuse him of connivance not only with the Russian enemy, but also with the Chinese enemy.

videos
https://www.pandoratv.it/category/opinioni/manlio-dinucci-opinioni/
Read more »
Posted by luisavasconcellos2012@gmail.com at 10:33 AM No comments:

Read more »
Posted by luisavasconcellos2012@gmail.com at 9:45 AM No comments:

The Art of War
战争的艺术

The war response to the negotiation
战争是为谈判而服务的

"You attacked our democracy. We don’t care about your denials just like degenerate gamblers. If you take this attitude, we will consider it an act of war ": so Trump should have told Putin at the Helsinki Summit, according to Thomas Friedman, well-known New York Times columnist.
《纽约时报》知名专栏作家托马斯·弗里德曼说，川普早就应该在赫尔辛基峰会上这样告诉普京：“你攻击了我们的民主。我们不在乎你如何否认，因为你就像是一个堕落的赌徒。如果你依然是这种态度的话，那么我们将会把它当作一种战争的艺术。”

He accuses the Russian president of "attacking NATO, a fundamental pillar for international security, destabilizing Europe and bombing thousands of Syrian refugees forcing them to flee to Europe".
他指责俄罗斯总统“攻击北约，这个国际安全的根本支柱，使欧洲不稳定并且轰炸成千叙利亚难民迫使他们逃到欧洲。”

He then accuses the president of the United States of having "repudiated the oath to the Constitution" and of being "an asset of Russian intelligence" or of willing to play that part.
然后他指责美国总统“违反宪法宣誓”并且去当“一个俄罗斯情报机构的资产”或者愿意去当那个角色。

What Friedman expresses with provocative language is the position of a powerful internal and international front (of which the New York Times is one of the main spokespersons) contrary to the US-Russian negotiation, which should continue with Putin's invitation to the White House.
托马斯·弗里德曼用挑衅性的语言所表达出来的意思，代表了一股强大的国内和国际反对势力的立场，这股势力反对美俄谈判，并且《纽约时报》是这股势力的其中一个主要喉舌，这股反对的浪潮可能会持续到普京被邀请到白宫。

However, there is a substantial difference. While the negotiation has not yet produced facts, the opposition to the negotiation is expressed not only in words but above all with facts.
然而，形成巨大反差的是。尽管谈判尚未取得任何成果，但是对这场谈判的反对已经不仅通过语言，而且还通过所有的形式表现了出来。

Vanifying the detente atmosphere of the Helsinki Summit, the United States' planetary military system is intensifying its war preparations from the Atlantic to the Pacific.
赫尔辛基的缓和氛围正在消失，美国的全球军事体系正在剧烈的将它的战争准备，从大西洋转移到太平洋。

After a US armoured brigade landed in Antwerp with a hundred tanks and a thousand military vehicles, a US air brigade arrived in Rotterdam with 60 attack helicopters. These and other US / NATO forces are being deployed close to the Russian territory, as components of the Atlantic Resolve operation, launched in 2014 against "Russian aggression".
在一支由100辆坦克和1000辆军用车辆组成的美国装甲旅，被空运到比利时安特卫普之后，60架武装直升机组成的的一个美国空军旅抵达了荷兰鹿特丹。这些部队和其他美国/北约部队，正在被部属到俄罗斯领土附近，以此来作为“大西洋决议行动”的组成部分，“大西洋决议行动”启动于2014年，目的是针对“俄罗斯的侵略”。

In anti-Russia function, Poland requested the permanent presence of a US armoured unit on its territory, offering to pay 1.5-2 billion dollars annually. At the same time NATO is intensifying the training and armament of troops in Georgia and Ukraine, candidate countries to become members of the Alliance on the border with Russia.
为了反对俄罗斯，波兰要求美国装甲单位永久驻扎在它的领土上，并愿意每年向美军支付15到20亿美元。与此同时，北约正在加强格鲁吉它和乌克兰的军事训练和军事装备，这两个国家有可能会变成与俄罗斯接壤的联盟成员。

Meanwhile, the US Congress wellcame with all honors A-driy Parubiy, founder of the Ukrainian National Socialist party (on the model of the National Socialist Party of Adolf Hitler), head of the neo-Nazi paramilitary groups employed by NATO in the Maidan putsch.
与此同时，美国国会以最高荣誉欢迎了A级教唆犯，他是乌克兰民族国家社会主义党（阿道夫·希特勒的德国民族国家社会党的翻版）的创建者，他是新民族国家社会主义准军事团体的首脑，这个团体在乌克兰广场暴动中被北越雇佣。

The NATO Command of Lago Patria (JFC Naples) - under the orders of US Admiral James Foggo, who also commands the US Naval Forces in Europe and those for Africa - is in full swing to organize the big exercise Trident Juncture 18, with the participation of 40000 soldiers, 130 airplanes and 70 warships from over 30 countries, including NATO partners Sweden and Finland.
地中海的北约拉戈·帕特里亚司令部（那不勒斯）——处在美国海军上将詹姆斯·福戈的指挥下，他同样也是美国海军在欧洲和非洲的指挥官——正在如火如荼地，去组织来自包括瑞典和芬兰在内的，30个国家的40000名士兵、130架战机和70艘战舰，进行“三叉戟关键决断18”大型联合军事演习。

The exercise, which will take place next October in Norway and in its adjacent seas, will simulate a scenario of "collective defense" evidently against "Russian aggression".
这场军事演习，将于2018年10月在挪威和它的临海举行，这场演习将会把“俄罗斯侵略”当作假想敌来演练“共同防御”

In the Pacific, the great Rimpac 2018 naval exercise is taking place from 27 June to 2 August - organized and directed by USINDOPACOM, the US Command covering the Indian and Pacific oceans - with the participation of 25,000 sailors and marines, over 50 ships and 200 war planes.
在太平洋，“林柏克2018”海上联合军演正在2018年6月27日到8月2日期间举行——由美国印度洋太平洋司令部组织和协调——有25000名士兵和海军陆战队员、超过50艘舰船和200架战机参加。

The exercise - which also involves France, Germany and Great Britain - is clearly directed against China, which Admiral Phil Davidson, commander of USINDOPACOM, calls "great rival power that undermines the international order to reduce US access to the region and become the region hegemon».
这场军事演习——同样也将会涉及到法国、德国、和英国——这明显是在针对中国，印度洋太平洋司令部指挥官海军上将菲尔-戴维森，将中国称为“侵蚀国际秩序削弱美国对地区的介入，并变成地区霸权的强大竞争对手。

When Trump meets the Chinese president Xi Jinping, Friedman will accuse him of connivance not only with the Russian but also with the Chinese enemy.
当川普会见中国国家主席习近平的时候，弗里德曼将会指责他不仅通俄而且还通共。

The All-Pervasive Military/Security Complex
The article below by Professor Joan Roelofs is reproduced with permission from CounterPunch.
The article appeared in the print edition of CounterPunch Vol. 25, No. 3, and is available online at https://joanroelofs.files.wordpress.com/2018/07/insecurity-blanket.pdf
The article is long but very important and is worth a careful read. It shows that the military/security complex has woven itself so tightly into the American social, economic, and political fabric as to be untouchable. President Trump is an extremely brave or foolhardy person to take on this most powerful and pervasive of all US institutions by trying to normalize US relations with Russia, chosen by the military/security complex as the “enemy” that justifies its enormous budget and power.
In 1961 President Eisenhower in his last public address to the American people warned us about the danger to democracy and accountable government presented by the military/industrial complex. You can imagine how much stronger the complex is 57 years later after decades of Cold War with the Soviet Union.
The Russian government, Russian media, and Russian people desperately need to comprehend how powerful the US military/security complex is and how it is woven into the fabric of America. No amount of diplomacy by Lavrov and masterful chess playing by Putin can possibly shake the control over the United States exercised by the military/security complex.
Professor Roelofs has done a good deed for the American people and for the world in assembling such extensive information documenting the penetration into every aspect of American life of the military/security complex. It is a delusion that a mere President of the United States can bring such a powerfull, all-pervasive institution to heel and deprive it of its necessary enemy.

The Political Economy of the Weapons Industry

By Joan Roelofs
For many people the “military-industrial-complex (MIC)” brings to mind the top twenty weapons manufacturers. President Dwight Eisenhower, who warned about it in 1961, wanted to call it the military- industrial-congressional-complex, but decided it was not prudent to do so. Today it might well be called the military-industrial-congressional-almost-everything-complex. Most departments and levels of government, businesses, and also many charities, social service, environmental, and cultural organizations, are deeply embedded with the military.
The weapons industry may be spearheading the military budget and military operations; it is aided immensely by the cheering or silence of citizens and their representatives. Here we will provide some likely reasons for that assent. We will use the common typology of three national sectors: government, business, and nonprofit, with varying amounts of interaction among them. This does not preclude, though it masks somewhat, the proposition that government is the executive of the ruling class.
Every kind of business figures in the Department of Defense (DoD) budget. Lockheed is currently the largest contractor in the weapons business. It connects with the worldwide MIC by sourcing parts, for example, for the F-35 fighter plane, from many countries. This helps a lot to market the weapon, despite its low opinion among military experts as well as anti-military critics. Lockheed also does civilian work, which enhances its aura while it spreads its values.

Read more »
Posted by luisavasconcellos2012@gmail.com at 5:12 PM No comments: